Established in 1953 by the Israeli Parliament, Yom Hashoah, (also known as Holocaust Remembrance Day), seeks to honor the victims of the Holocaust. In fact, the complete name of the day is Yom Hashoah Ve-Hagevurah, that translates to "Day of (remembrance of) the Holocaust and the Heroism".  Beginning the evening of Sunday, April 23rd and ending Monday evening of the 24th, Yom Hashoah commemorates the bravery of the Jewish people who were murdered by the Nazi’s in World War II between 1933 and 1945. There were millions of victims during this period, including Jews, Russian gypsies, disabled persons, homosexuals and other minorities. Every year, people in the United States of America including those with Jewish ancestry hold events or ceremonies to remember the Holocaust victims who died. Activities may include reciting a prayer for the departed (Kaddish) and lighting memorial candles. Often, survivors are asked to tell their stories to educate the young about the atrocities that took place. Rituals associated with Yom Hashoah vary among synagogues in the U.S.. Additionally, educational programs about the historical events related to Holocaust Remembrance Day are shown during this time of the year to American students who are studying WWII as well as Jewish history. These educational programs may include a Holocaust-themed film like Schindler's List and a documentary featuring the stories of Holocaust survivors.

To remember the victims of the Holocaust who died during World War II, we will share the work of talented artists. They’ve brilliantly used graphic design, photography and print to express themselves and remind people of the inhuman acts that took place during this time in our world’s history. We hope this collection inspires you as a designer to create your own Yom Hashoah piece, in order to keep alive the memory of the Holocaust. 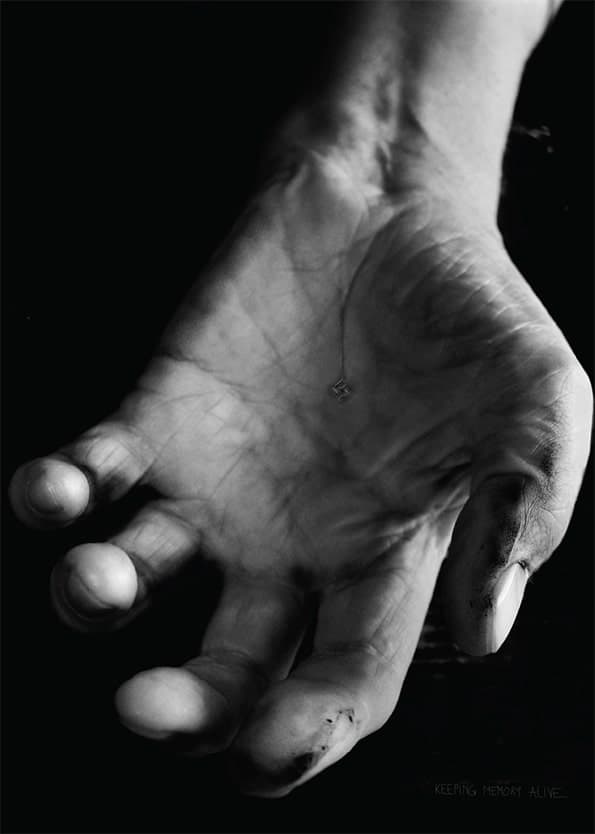 “Your hand is like a map which you can read, every worries and woes are written there and for me is the line of life the most important topic in my posters, where is written also terrible death of this people”, stated Karolína Petrů, the artist. Her challenge was to find a way to show the journeys through the Holocaust and, somehow, she managed to do it wonderfully via photography.

This graphic designer, Katia Mikov, came up with a range of clever postcards for Yad Vashem, Israel’s official memorial to the victims of the Holocaust,  making people aware of one of the many cruel policies adopted by the Germans. During the Holocaust, they provided Jews with tiny portions of food – 184 calories per day! In consequence, many died as a result of malnutrition. Hunger claimed thousands of lives. 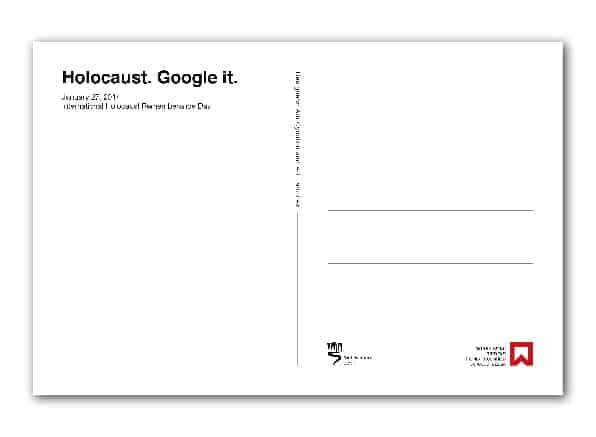 This compelling postcard was designed to commemorate Holocaust Remembrance Day 2014. In addition to that, it also offered a basis for age-appropriate activities which were then implemented in educational settings by Yad Vashem, the world center for research documentation and education of the Holocaust.

According to the designer, Galia Nikolin, “This project uses traffic sign icons, for they are international symbols known to all. The cards were designed like a driving theory test tickets, with the answers imbuing each traffic sign with a different meaning.” The postcard design and word choice “drive straight ahead to unload Jews” emphasizes the inhumanity that Holocaust victims faced. 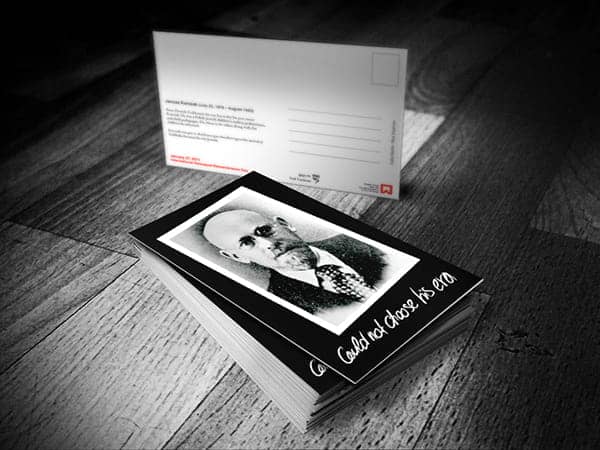 Once again Galia Nikolin urges us to remember the injustice that so many faced with her collection of postcards. “In this project we presented the fact that despite our life’s achievements and our social status, we are judged by terms that are not under our control.” One of the series showcases Anne Frank, who became famous posthumously after the publication of The Diary of a Young Girl, inscribed with the words Could not choose her luck.

“Behind every name there is a story, there is a life. All those millions of people that were killed during the Holocaust are only names that remain.” As stated by the designer, Natasha Vaispapir, her goal was to showcase how the Holocaust impacted individual Jewish lives in different ways. In her powerful project, little pieces of names constitute the big picture.

In honor of Yom Hashoah, we wanted to highlight the thought-provoking work of these gifted artists. We hope their work moves you to keep the memory of the countless victims of the Holocaust in your hearts. Did you find inspiration for your own Holocaust Remembrance Day project?  We’d love to hear your thoughts and insights. Please feel free to kindly leave a comment below. If you have your own ideas, browse our print products catalog and bring them to life!

How to Make Easy Fabric Postcards With These Free Tutorials