by Emma Davis Nov 03, 2015 384
The Cardstock Printed and Data-Filled FIFA World Cup Ball There’s no question that FIFA World Cup is one of the most awaited opportunities for designers and marketers to catch the eye of millions of soccer fans around the world. Successful projects intend to convey a message as well as creating a unique piece of art. These engaging campaigns around the World Cup ball are not only functional, but also brilliant.

This is today's Print Design Inspiration:

For designers that want to make the difference, the only limit is their imagination. There is a myriad of ways to get off the beaten path while achieving the goal of clearly displaying complex information. For example, infographics are not the only way dense data can be broken down and communicated visually. This 3D model of the FIFA World Cup football includes the history and data of the 32 teams that played in the World Cup, printed and assembled by a creative team. Impressive to say the least, take a look at the 3D World Cup Dataviz Ball. 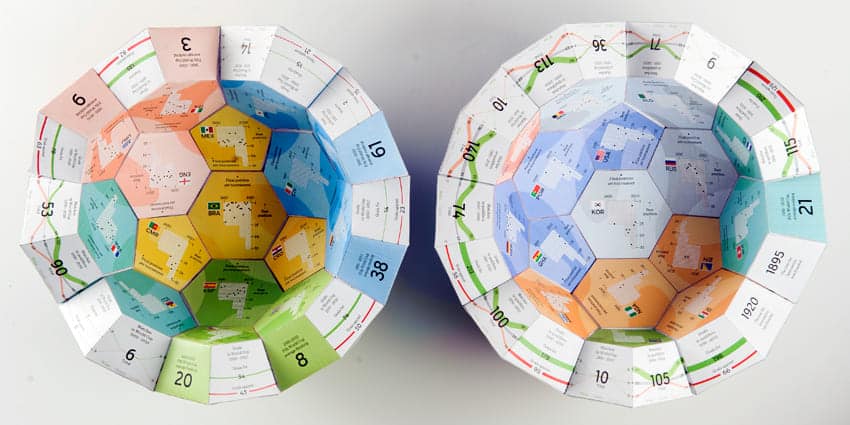 Paper is the main protagonist of this project and what a better way to awake the curiosity of soccer fans than a 3D format World Cup ball. This creative team came up with a non-digital idea: a three-dimensional World Cup ball that comprises the summary of the matches, goals, ranking and top scores since 1930 until Brazil’s 2014 World Cup. For those who like to dig deeper into statistical analysis and those who appreciate interactive design this project is a masterpiece.

How is The Data Organized?

Each team profile’s has two sections: history and squad. The eight different color codes simplify its readability. As the information is as complete as possible, you can compare the team's’ goals, match results and progress. The frustum, which is the building block of the ball construction, has various line weights to give a visual comparison of goals. The beginning of the project started with 100 spreads to end up with a minimum of 16 data sheets. Considering interactivity as top priority, the team created a first mockup. Since it summed up the information clearly, it was time for design to come into the scene. The aim was to find a ball shape that could match with the 32 teams of tournament. Voilà! The perfect shape was the truncated icosahedron. The chosen shape led the creative team to the next challenge: discover how to assemble the frustums. As a pyramid’s tip is complex to manage, they decided to turn pyramids into truncated pyramids (without a tip). The pieces joined together resulted in a hollow ball, so the designers realized that it was a better idea to divide the ball into two halves. The truncated icosahedron had to match the Brazuca ( a term meaning  ¨ Brazilian¨ ) pattern of the 2014 World Cup official ball, which was inspired by the Amazon River meanders. The next step was to decide the position of each country without ungrouping the teams. The most precise method to compare which country of the same group was stronger than the other was by using a symmetrical Sankey diagram. After several trial and error processes, the scatter plot was the chosen chart style. Apart from statistical data, phase progression, FIFA ranking, the interactive ball also includes an illustration of coaches. Once all 32 double pages were finished, data printing was a decisive step to make this ambitious project known worldwide ensuring the highest quality standards. This ambitious project was a mix of a strong attention to detail and a complex thinking process at every stage of development. The result? An astonishing 3D World Cup ball.

A clever and exceptional design like the 3D FIFA World cup is worth taking a look at. Custom printing is a tangible way to interact with audiences and grab their attention. If you have brainstormed a number of bright ideas for your next project, go with the one that best serves your purpose and helps you shine and stand out above the rest.

How To Label Amazing Standard Kids Stuff For School